Welcome to the KDP Weekly Newsletter – the Kansas Democratic Party’s update of the biggest things going on in the state party and the state government. What are we focused on this week? Redistricting, KDP Training & Updates, Platform Committee, #KSLEG Updates, 2022 Elections, COVID-19, Voting Rights, DNC Investment, Social Media Updates, KDP Merch and more!

Interested in helping the Party get out our messaging to encourage Kansans to vote blue? Sign up for our new Letter to the Editor program here!

Kansas Legislators have agreed to hold 14 public hearings across Kansas on the redistricting process. The meetings will be open to the public as well as streamed virtually. Transparency during this process is the only way to rebuild public confidence following statements by top state GOP leaders advocating for political gerrymandering. During this process, it is incredibly important that we preserve the core of Kansas’s congressional districts in order to protect communities of interest who benefit from cohesive representation in congress. Any major changes to the current congressional districts will disproportionately impact minority communities who already struggle for representation.

Yesterday, Vice President Kamala Harris announced an expansion of the Democratic National Committee’s ‘I Will Vote’ initiative to address and overcome Republican efforts across the country to to make voting more difficult and burdensome. The DNC will invest $25 million in voter education, voter protection, voter registration, and improved technology to make voting more accessible for all Americans and fight back against Republicans’ unprecedented voter suppression efforts. With these investments, it’s clear the DNC is going to be the party’s lead organization on matters of voting rights, and that President Biden, Vice President Harris and Chair Jaime Harrison are putting every available resource into combatting Republican attacks.

In an effort to ramp up training for upcoming elections in 2021 and beyond, the Kansas Democratic Party, together with the DNC Best Practices Institute, are excited to offer a series of virtual trainings over the course of the next few months. These programs will enhance the skills of progressive activists and volunteers by ensuring comprehensive training is free and accessible for Democrats all over the country. The training and its description is listed below:

“Supporting working parents in our workforce is not only the right thing to do – it’s good for our economy,” Kelly said in a statement. “We’re committed to recruiting and keeping talented Kansans in our state and creating a supportive environment for our families.”

Executive Order 21-24 increases the number of weeks of paid leave that primary and secondary caregivers can take. It also allows foster parents to take advantage of the leave policy.

Co-parenting workers who are both employed by the state of Kansas can decide who is a primary and who is a secondary caregiver. If only one parent in the household is a state employee, they will be considered a primary caregiver.

(The Topeka Capital-Journal) – Attorney General Derek Schmidt said Wednesday he is asking the Kansas Supreme Court to reconsider its controversial 2019 ruling declaring that the state constitution protects the right to an abortion.

The move comes as part of a motion, filed Tuesday, appealing a ruling in a key abortion case to the state’s highest court.

The 2019 opinion on the matter was when the state’s highest court found Kansans have a “fundamental right” to an abortion under the state constitution, a landmark ruling that anti-abortion advocates have aimed to undo ever since.

(USA Today) – Local Democrats have selected a 44-year-old Overland Park attorney to fill a vacancy in the Kansas House.

Dan Osman will replace former Democratic Rep. Jennifer Day, also from Overland Park, who resigned in June because she was moving outside the district. Democrats selected Osman on Wednesday night.

He also served previously on the Hickman Mills school board on the Missouri side of the Kansas City metropolitan area.

He’s taking the seat for a district that’s been hotly contested in the last two elections.

(The Sunflower State Journal) – A potential Democratic candidate who could challenge Republican Jake LaTurner in Kansas’ 2nd District has surfaced.

Patrick Schmidt, a former naval intelligence officer from Overland Park, has been making the rounds with Democrats in recent weeks as he discussed a bid for Congress. Multiple sources have confirmed meetings or conversations with Schmidt, who is now in the U.S. Naval Reserves but worked in Naval Intelligence from about 2016 through 2021.

Most recently he was introduced as a congressional candidate at a fundraising reception for Gov. Laura Kelly by former Gov. Kathleen Sebelius, a source said.

The reception was held last week at the home of the daughter of former Democratic Party Chairman Larry Gates. Schmidt would not discuss his potential candidacy when reached this week, nor would he discuss any personal biographical details.

It was unclear how far along he was in planning a campaign, although another Democratic source said it appeared he’s hired a campaign compliance officer.

(Gardner News) – Governor Laura Kelly, in collaboration with the Kansas Department for Children and Families (DCF) and Kansas State Department of Education (KSDE), announced the continuation of the Pandemic EBT (P-EBT) program for Kansas families who missed out on school lunches during the 2020-2021 school year.

“Expanding the P-EBT program to childcare facilities will address food insecurity and make sure all Kansas children have reliable access to healthy foods as we overcome COVID-19,” said Governor Laura Kelly. “Keeping young Kansans safe and healthy is critical, and I’m glad to see this program reaching the families who need it most.”

Through this program, P-EBT will provide a nutritional resource to families who lost access to free or reduced-price school meals and/or childcare meals due to school closures or reduced in-person attendance hours for at least five consecutive days.

In an interview with KCMO Talk Radio, Warren said it was important to have someone who can successfully defend Kansans’ rights.

“We all see that we have the Biden administration coming trying to put their policies in place in Kansas,” Warren said. “You have to have someone who fights and wins. And I’ve proven I can do that.”

Warren, 52, a first-year senator from Leawood and chair of the Senate Judiciary Committee, pointed to her record promoting a constitutional amendment that would allow limits on abortion rights and changes to emergency management laws.

(Kansas Reflector) – The state of Kansas closed out June with unexpectedly strong corporate and personal income tax as well as sales tax collections to push revenue during the past fiscal year $758 million beyond receipts anticipated by analysts, the governor said Friday.

Gov. Laura Kelly, a Democrat seeking re-election in 2022, said the June report affirmed work to strengthen the state’s economy was paying off.

“As we transition into the next fiscal year,” Kelly said, “my administration will continue moving our economy forward by prioritizing pro-growth policies that will support Kansas businesses and families.”

The Kansas Department of Revenue said the state took in $8.9 billion during the fiscal year running from July 1, 2020, to June 30. The total was $758.1 million, or 9.3%, greater than projected by a panel of revenue forecasters.

(KCUR) – Patrick Stein was bitter. Battles with drugs and the failure of his business in the 2008 recession had derailed his life.

He fumed at the federal government for not doing more to help people like him while immigrants flooded in around him in Garden City.

He went to Washington, D.C., seeking a bailout like the banks and auto companies were getting but left humiliated when members of Congress from Kansas ignored him.

His story of frustration and anger — at Washington, at big business, at a perceived threat to white culture — echoes long-festering grievances in the rural Midwest that fueled sometimes-violent actions against the government. Episodes that make the Jan. 6 siege of the U.S. Capitol less a surprise and more of an evolution of far-right dissent.

After his business failed, Stein moved into a trailer on his parent’s property where he spent a lot of time on right-wing news sites growing angrier.

(Kansas City Star) – Every time young patients enter her office, Krista Mijares, a pediatrician in Pittsburg, Kansas, asks them and their parents if they’ve been vaccinated. If not, she makes her pitch.

Do they want to be vaccinated? How about now? If they don’t, why?

In recent weeks the conversations have come with a warning: the delta COVID-19 variant is in their community and makes it riskier than ever to remain unvaccinated. And vaccinated or not, Mijares advises families to once again wear masks in public spaces if they’ve stopped.

“Don’t drop your guard, and if you are eligible to get a vaccine get vaccinated,” Mijares tells patients.

Southeast Kansas is in a shaky spot. The New York Times identified Crawford and Cherokee counties as two of the state’s most dangerous places to be unvaccinated as the delta variant of COVID-19 spreads at alarming rates. Across the border in Southwest Missouri, delta’s aggressive advance and escalating hospital admissions prompted the state to ask for federal help.

(The Topeka Capital-Journal) – Climate change conjures notions of rising water levels along the coasts, severe drought in the Intermountain West and the record temperatures baking the Pacific Northwest this week.

Add to that toasty Kansas evenings.

New research from Kansas State University shows that rising overnight temperatures hurt wheat harvests. Rice, corn and barley all face similar problems. While researchers also look into finding more resilient varieties of those crops to account for the change, the immediate climate trends could have a dramatic impact.

In trials of some of the most popular varieties of wheat grown in Kansas, K-State and North Carolina State University researchers found that an increase of only 1.8 degrees Fahrenheit in overnight temperatures caused a 5% reduction in wheat yield.

(The New York Times) – What kind of restrictions on voting violate Section 2 of the Voting Rights Act? That’s the basic question in the wake of the Supreme Court’s decision to uphold two Arizona voting provisions last week.

The court’s decision didn’t offer a clear answer. Instead, it offered “guideposts” to illustrate why the Arizona law passed muster, without clearly indicating when a law might go too far. Those guideposts appear to set a high bar for successful voting rights litigation.

But the guideposts offer lessons about what kinds of voting restrictions might be more or less vulnerable to legal challenge.

Many of those lessons stem from a central concept underlying the decision: the idea that every voting system imposes certain “usual” burdens on voters, like traveling to a polling station or returning your ballot.

Justice Samuel Alito, writing for the majority, made the case that these burdens may inevitably result in “some” racial disparity. As a result, the conservative justices reject the idea that racial disparity alone is sufficient to establish that a state denied everyone an equal opportunity to vote. That leaves the court looking for signs of a particularly unusual and distinctive burden, even though this added hurdle doesn’t exist in the text of the Voting Rights Act.

Here are some of our top posts from this week. 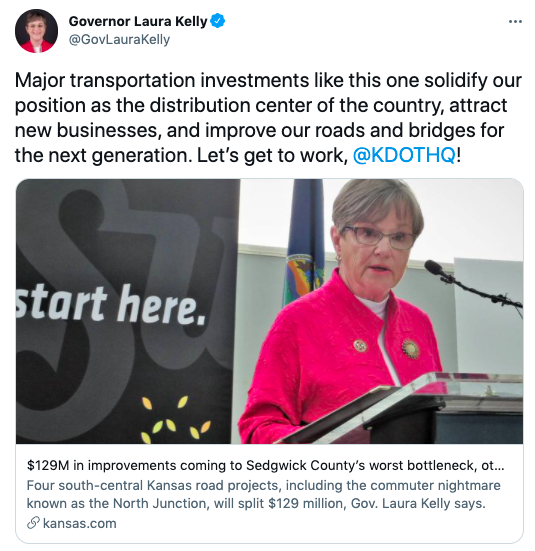 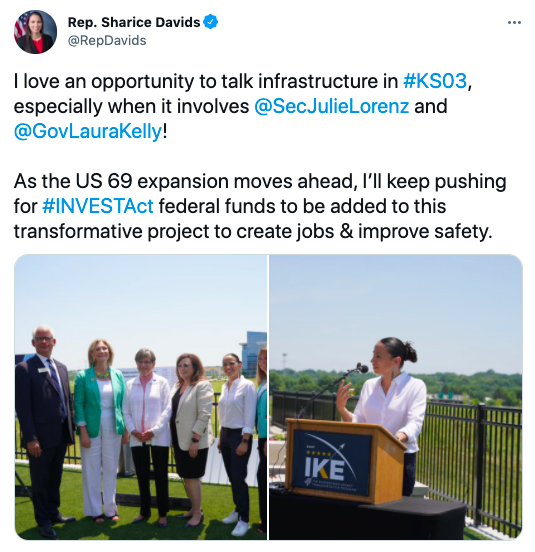 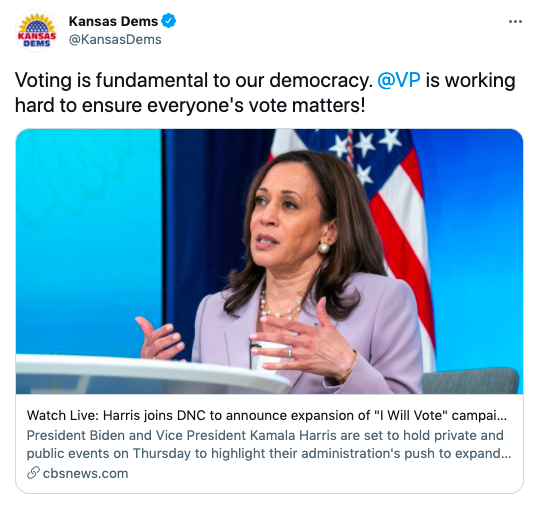 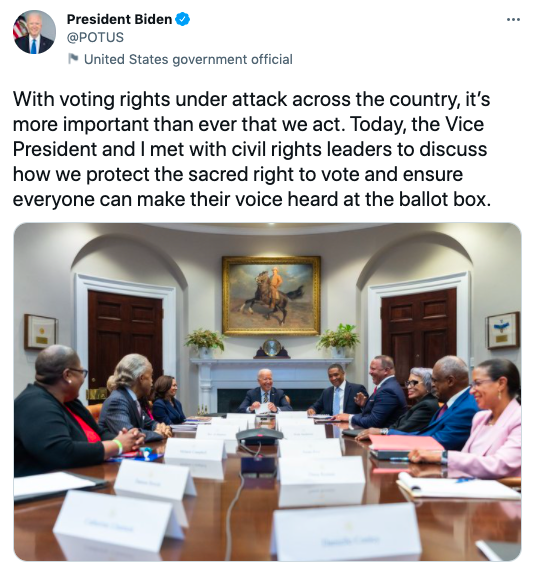 Be sure to view KDP Merch at the Kansas Dems Online Store. Make your voice heard by picking up our new shirt from the KDP Store. And remember each purchase includes a donation to the party to help elect Democrats across the state.

Paid for by the Kansas Democratic Party, Yolanda Taylor, Treasurer